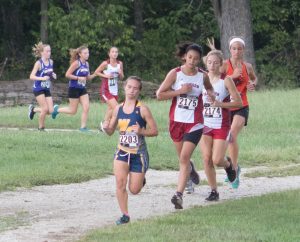 Chrisman’s mix of returning experience and an enthusiastic group of young and inexperienced newcomers, thrived at the Oak Grove Invitational on Thursday at Bent Oak Golf Course.

But, the success was more than just medalists.

Of the 26 runners that ran, 24 met his or her meet goal that the coaches set. The goals were not too easily beatable (upping the mile pace by 10 seconds a mile or more from their last race depending on runner). The runners not only reached them, they beat them by a total of 20:02 as a team.

And, 11 runners had PRs by a combined 19 minutes and 27 seconds. And, all but one runner improved their previous time from this season and the one who didn’t was just seconds from matching the previous time.

Lilly Conner-Urnise took 9th out of 62 runners to medal in varsity girls. She took 26 seconds off her time from Saturday. Sophomore Raigan Keltner also got a medal, taking 17th in her first 5k. She shattered her goal by more than two minutes.

Seniors Elizabeth Eppert and Katie Laughlin continue to improve as both got faster from Saturday and both surpassed the goal time set for them.

Alijah Twaddell, a junior, took 59 seconds off from Saturday and was 18th in varsity boys to medal. Senior Mauricio Espinosa, a first-year runner, just missed out on medalling in 25th.

Freshmen Kona Hudson and Kimori Pointer were 3rd and 4th runners for the varsity boys, respectively, for the Bears. Both met their goals and also improved from Saturday. Future is bright for these two.

Senior Daniel Ethridge took 1:17 off of Saturday’s time with a new PR. Junior Jared Stevenson and sophomore Braiden Sturtevant both also competed and ran well for their first 5k ever.

In JV girls, senior Adreal Bell, new to cross country, took 3rd out of 50. She easily passed the goal we set and has earned a varsity spot for City Champs on Tuesday.

Charly Claibourn took 15th in JV girls, Bella Miller was 17th, and Olivia Vanfossen was 19th. They beat their goals by a combined 4+ minutes and Bella and Charly both set 2-mile PRs.

For JV boys, every runner improved and every runner met their goal. Wyatt Leutzinger took 8th out of 67 runners. Tanner Carter, Cameron Basinski and Zak Stannifer each beet their goal by more than a minute to cap a day of growth and success at the Oak Grove Invitational.

Chrisman is back in action on Tuesday at the Independence City Championships at Sibley Orchard.

No Events This Week

Events are added by athletic staff.
View All Events