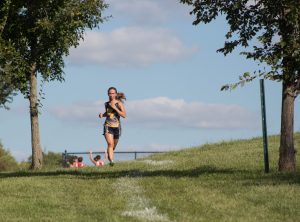 It was a great night on Tuesday at the Independence City Championships for the Chrisman cross country teams.

In varsity girls, senior Lilly Conner-Urnise took third for the second straight year and her third top 5 finish in the meet for her career.

“She has had a tremendous career for us and has been a big part of the Independence cross country scene the past four years,” coach Jason Stacy said.

Sophomore Raigan Keltner medaled in 11th. Junior Evelyn Boughan had a strong run and continues to improve greatly. She took 13th. Senior Adreal Bell ran well in her first ever 5k to medal for the varsity girls as well

“He took sixth for the varsity boys but also means so much to the team as a leader,” Stacy said. “Loved seeing him approach a freshman who ran really well for JV and tell him he could be good but he needs to stop missing practices, ‘You won’t miss again.’

“Alijah has been an incredible addition to the program this year after transferring and we are lucky to have him. Such a great kid and leader.”

The Bears are back in action Saturday in the Blue Springs Invitational at Lake Jacomo.