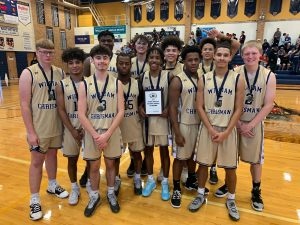 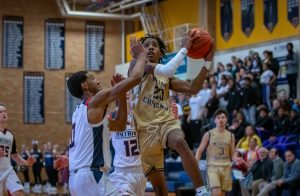 The Bears opened with a 82-61 win over Camdenton. The boys got off to a hot start, scoring 32 points in the first quarter. They then cruised to a comfortable win to advance to the semi-finals against Deer Creek High School

The semi-final game was intense against a very good 6A team from Edmond, Oklahoma. The game was back and forth and ended up in overtime. With less than two seconds left in the game, senior Zachariah Rowe hit a game winning shot over two defenders! The Bears advance to the championship. What could be better?

Well, I’m glad you asked. The Bears squared off with Noland Road rivals, Truman High School in the championship game! Another hotly contested, exciting game was in store. Yes, you guessed it, another overtime game. This time it was Isaiah Jackson’s turn for the heroics. Isaiah took a closely contested jumper from just inside the three point line. The buzzer sounded as the ball was in the air. It was as if the entire gym was frozen as the ball sailed through the air until is splashed home for the championship winning basket.

The win moved the Bears to 4-0 on the season. William Chrisman is currently ranked #6 in the state for class 5 basketball.